Why are public sector company stocks rallying at the mere mention of the word “privatization”? The answer is quite simple. Privatization means a shift to profitable growth. This does not mean that public companies are not profitable. Quite the contrary, many are very profitable, growing and paying large dividends, much of which goes to its main owner, the government, of course. In fact, dividends from state enterprises, in addition to RBI, constitute a major item in the Centre’s annual budget.

So let’s see why these government-owned entities aren’t getting their fair value from public procurement.

By its very nature, the work of any elected government is to enhance the public good. This does not quite correspond to the primary objective of the company, which is to make a profit. This is the genesis of the problem. While the decisions of a private company are motivated by the desire to generate value for its shareholders, this is not quite the case for public entities, which can act in ways that promote the good of society in as a whole rather than that of the shareholders.

Consider the recent case of state-owned oil marketing companies holding down fuel price increases. It is evident that the decision is driven by a concern for the societal impact of soaring fuel prices, rather than a commercial consideration. While the decision may be appropriate from a national perspective, it does little for shareholders – who have to subsidize the rest of the population by accepting lower profits.

It is unclear whether it was solely global factors or also concerns about the future profitability of oil refining and marketing companies in India that deterred investors from launching bids for Bharat Petroleum Corporation Limited, but such apprehensions weren’t bad. Private players like Shell and BP that have entered the fuel marketing business find themselves in a bind when state oil majors decide to hold the price line despite a surge in crude prices.

These non-market-driven decisions, made in the interest of the public and not shareholders, tend to deter investors in industries that are highly regulated or dominated by public entities.

Moreover, even decisions such as expanding capabilities and diversifying into new areas of business may be driven by a broader government agenda than mere business interest. Such decisions may undermine shareholder objectives.

Although the government has stated its philosophy of not wanting to do business, there have been challenges in its path to privatization, given public interest and political considerations. However, going down this path is a great way to create value for itself and for public company shareholders. A transition to a private entity, much like Air India, is a good model to follow.

It is better to identify non-critical sectors and accelerate the pace of privatization for the good of the economy and the shareholders, since sectors dominated by public entities tend to foster inefficiencies and prolong the duration of archaic and unsustainable policies. And profitability is the best measure and driver of long-term sustainability.

The significant undervaluation of public companies relative to the rest of the market tends to drive short-term increases in these stocks, but most of these entities, despite being robust companies, fail to generate the kind of return that the private companies do.

A look at the returns generated by the BSE-Sensex, BSE-500 and BSE-CPSE indices reveals the wide variance. While the Sensex has provided a CAGR of 8.8% since 2015 and the BSE-500 of 9.1%, the CPSE index has only returned 1.1%. The valuation given to private companies is also higher than that of public companies. The Sensex traded in a PE range of 18.7x to 29.5x and the BSE-500 18x to 29.6x, but the CPSE index only traded in the range of 6.7x to 14.6 over the past nine years. Even on a dividend yield basis, public companies offer much more value. 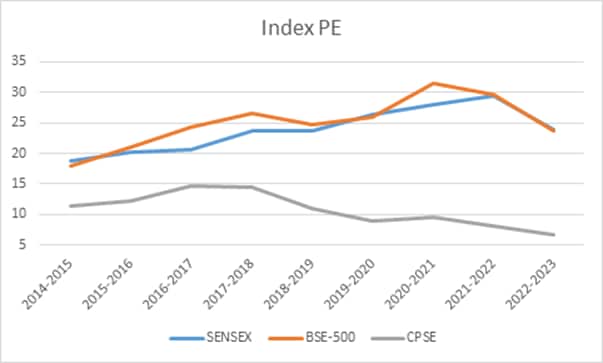 From the perspective of a long-term investor, however, investing in these companies only makes sense if the company itself appears viable and there is a clear path to privatization. Because privatization will not only dictate business decisions, but also lead to a revaluation of the EP. And that can be a great value creation opportunity, especially at current valuations. But be careful what eggs you put in your basket.

Celebrities who own Ethereum in 2022 • Benzinga

Fed’s Daly: We want to lower inflation without crippling growth

Volvo hitchhiked with Tvs Group on its journey to green engines

Can the NFT market go down? • Benzinga