As he prayed in front of the small cross in her memory, Vincent Salazar hoped that the body of his daughter Layla would soon be returned to her family to prepare for her funeral.

The 11-year-old, the ‘family baby’ who loved TikTok and denim jackets, was one of 19 children who died at Robb Elementary School in Uvalde, Texastuesday.

If the grief of losing a child could be made more intense, Vincent is one of those parents who wonders if those lives could have been saved.

The remarkable confession of one of Texas’ highest brass that the “wrong decision” was made not facing the shooter sooner no doubt added to the pain for the families.

Vincent understands the difficulties small-town police officers face in the face of such horror, but says answers must come.

It is a reflection of the intensity of the public mood in Uvalde that the police could no longer evade these questions.

The images of family members being held back by the same police officers they implored to intervene are as shocking as they are heartbreaking.

In many ways, Tuesday’s scars will never heal.

Olivia Allen can testify to the vagaries of fate at a time like this. Her nephew, a student at Robb Elementary, was too sick to go to school on Tuesday.

“Why did they wait? she said of the police. Could lives have been saved? “That’s what I keep asking.”

For the second time in a week, Texas Governor Greg Abbott was interrupted while holding a press conference by a Democrat demanding action on guns.

Read more:
The full timeline of the police response to the massacre
Girl survived by ‘smearing herself in blood and playing dead’
State hosts arms convention pledging ’14 acres of arms’ just days after massacre 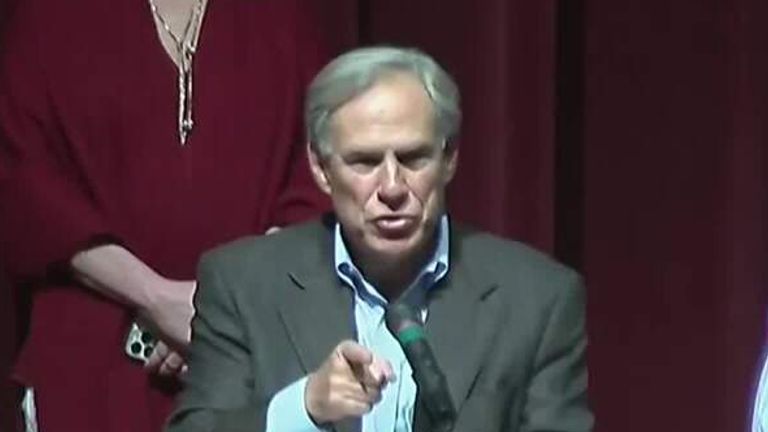 Governor: “I was misled. I’m livid

Roland Gutierrez, state senator from the district that covers Uvalde, told Mr Abbott: “You gotta do something, man.”

Led out of the room, he told us, “These children wouldn’t have died if this governor had put in place laws that would restrict access to these types of weapons.”

This seems obvious to many. But, as is so often the case in America today, division, rancor, lack of good faith, make meaningful action highly unlikely. The arms lobby refuses to budge.

And – despite all thoughts and prayers – it is inevitable that another city will one day join Uvalde in this horrific call of horror.