President Joe Biden and First Lady Jill Biden hosted the wedding of their granddaughter, Naomi Biden, at the White House last week in a ceremony that honored the space’s past with charming details and vintage keys.

Naomi did the celebrity thing where the White House suggested the wedding would remain private, but then did an entire cover shoot with her fiancé and Jill Biden to vogue. It’s the public relations equivalent of Brangelina asking for privacy while selling their children’s baby photos to people magazine.

Anyway, for the Mid-Atlantic-esque wedding on the South Lawn – the first of its kind – Naomi was inspired by Tricia Nixon’s Rose Garden wedding in June 1971 as well as Luci and Lynda Johnson’s weddings in 1966 and 1967 by examining back issues of Time magazine.

Among these inspirations, Naomi told vogue she chose a long-sleeved, high-necked Chantilly lace Ralph Lauren gown customized with a cathedral-length silk organza veil for the ceremony as a nod to Grace Kelly’s iconic wedding dress when she married Prince Rainier III of Monaco in 1956.

It’s quite a task to blend together three decades of weddings, the 1950s, 1960s and 1970s, especially since the fluffy skirts of the ’70s stood in stark contrast to the fullness and frills of the 1950s.

Naomi’s dress is undoubtedly stunning, although a little color in her bouquet of sweat peas and lily of the valley would have been a nice accent to make her stand out from the arrangements adorning the exterior of the White House which served as backdrop to the ceremony.

For the vogue shoot, drawing on the historic beauty of the White House’s Green Room was a stellar choice as the color palette complemented Naomi’s timeless aesthetic.

Though it seems like Jill Biden always tries to ruin such an aesthetic, whether it’s her dark teal Reem Acra coat she wore to the ceremony or her navy Reem Acra dress she wore to the reception with pumps. sequins. Did she even look at the vibe of this wedding before choosing these looks?

Similarly, I wish Naomi had gone the traditional route and also stayed in her custom Ralph Lauren formal dress for the reception. Instead, she changed into a strapless Reem Acra ivory silk bodycon dress that had little to do with the classic nature of the day.

In this handout provided by the White House, President Joe Biden and First Lady Jill Biden attend the wedding of Peter Neal and Naomi Biden Neal on the South Lawn of the White House on November 19, 2022 in Washington DC. (Adam Schultz/The White House via Getty Images) 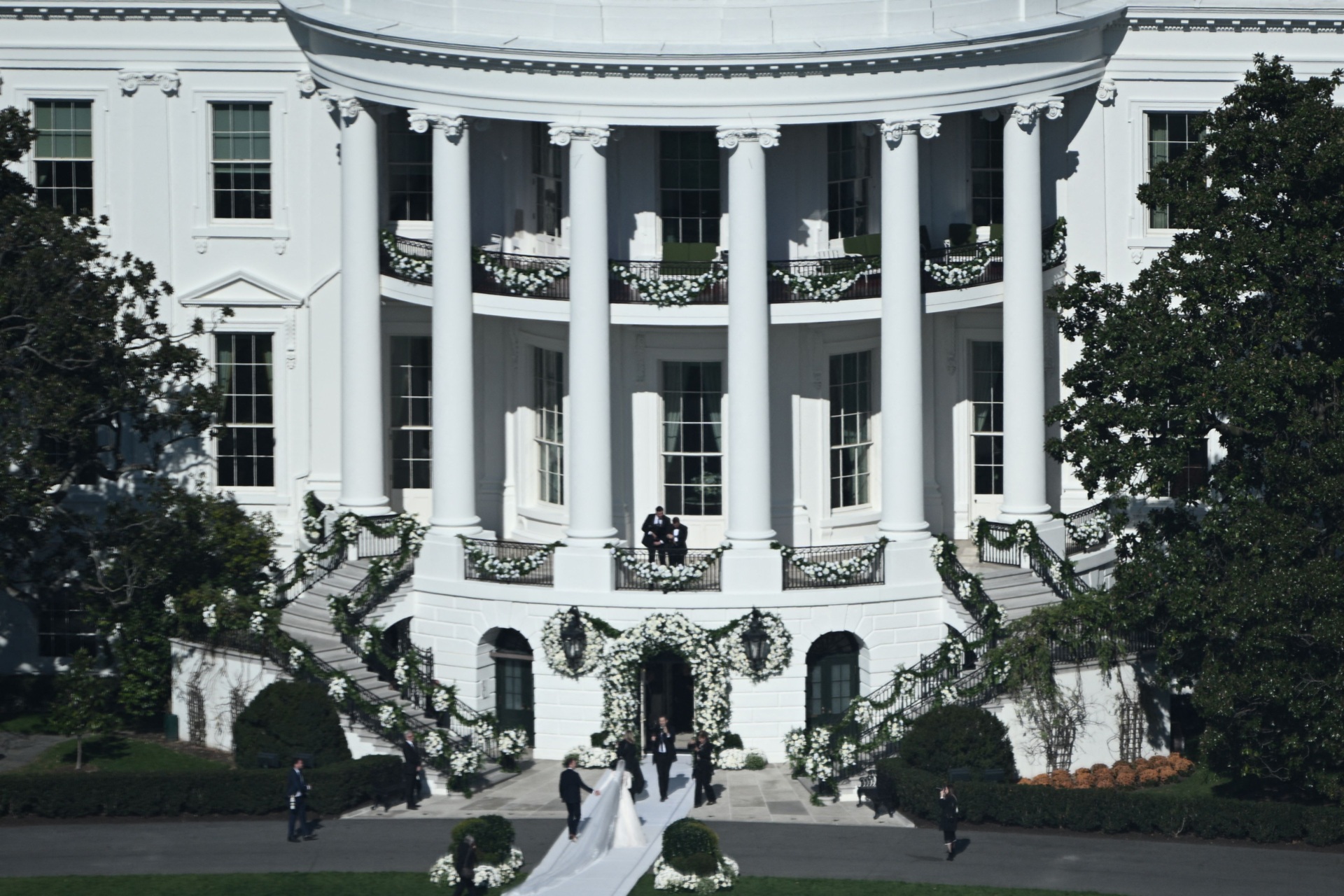 Naomi Biden, 28, granddaughter of US President Joe Biden, is seen during her wedding to Peter Neal, 25, on the South Lawn of the White House in Washington, DC on November 19, 2022. (BRENDAN SMIALOWSKI/ AFP via Getty Images) 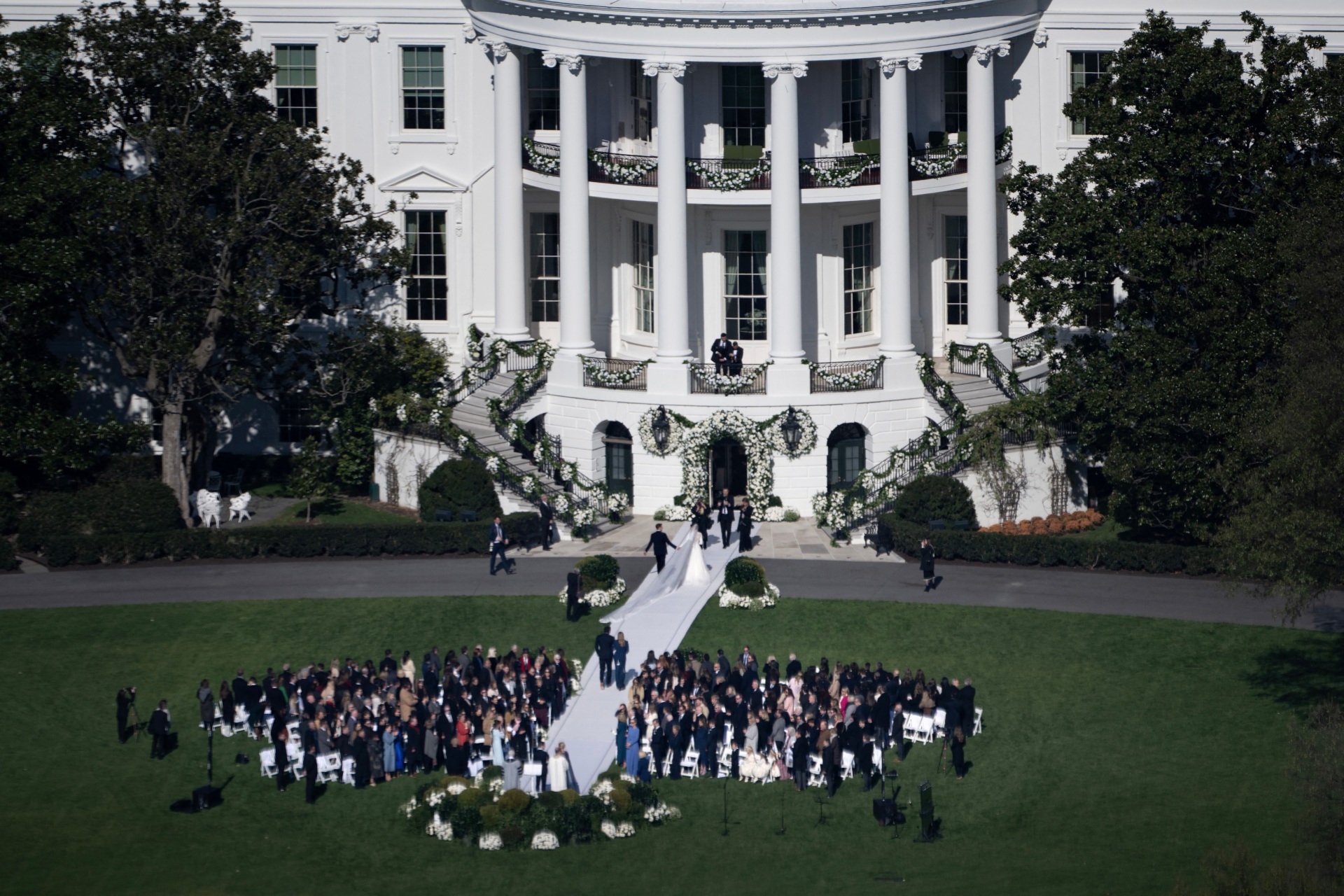 Naomi Biden, 28, granddaughter of US President Joe Biden, and Peter Neal, 25, walk towards the White House after their wedding on the South Lawn in Washington, DC on November 19, 2022. (BRENDAN SMIALOWSKI/AFP via Getty Images)

I can’t review Naomi’s wedding without reviewing Tricia Nixon’s, which is easily my favorite of all the White House weddings.

The wedding was particularly special as it was the first in the White House Rose Garden which, fortunately for Tricia, had been revamped about a decade earlier by then First Lady Jacqueline Kennedy and had become a staple of space.

Tricia’s wedding dress was designed by Priscilla Kidder, known as Priscilla of Boston, who also designed wedding dresses for Luci Johnson and Julie Nixon. The Edwardian-inspired dress featured silk organdy, lace, silk crepe and embroidered lilies that paired perfectly with the beautiful tin gazebo under which the couple were married as well as with the Pale yellow flowers that were apparently sprinkled in every possible place.

In particular, the delicate gazebo is a detail that has really fallen out of favor with the supposedly fashionable but a touch that needs to return. It centers an outdoor ceremony and keeps a bride and groom the focal point. Tricia’s wedding gazebo is now in the Nixon Library.

Unlike Jill Biden, the Pat Nixon-designed Priscilla of Boston dress for Tricia’s wedding was probably one of the most elegant looks of her time in the White House. Featuring pastel florals in blue, yellow, pink and gold, the dress featured a scalloped hem and neckline similar to Tricia’s dress. Above all, everyone seemed to attend the same event.

Speaking of cohesion, Tricia also made sure her tiered wedding cake looked like the gazebo under which she got married. 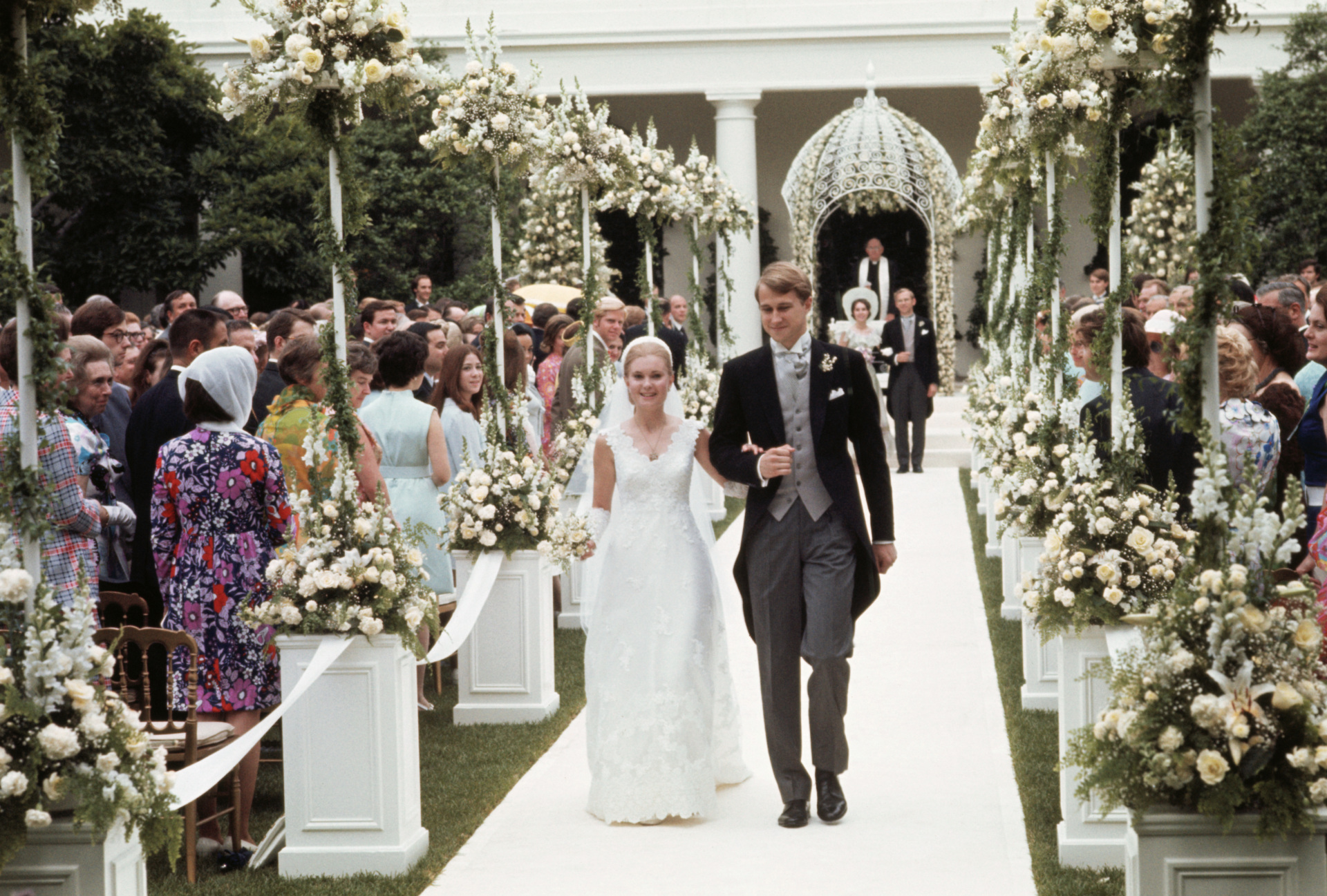 After saying their vows, Edward Finch Cox and Tricia Nixon Cox walk through rows of flowers in front of their guests on their way to the White House for the reception, after their wedding in the White House Rose Garden. 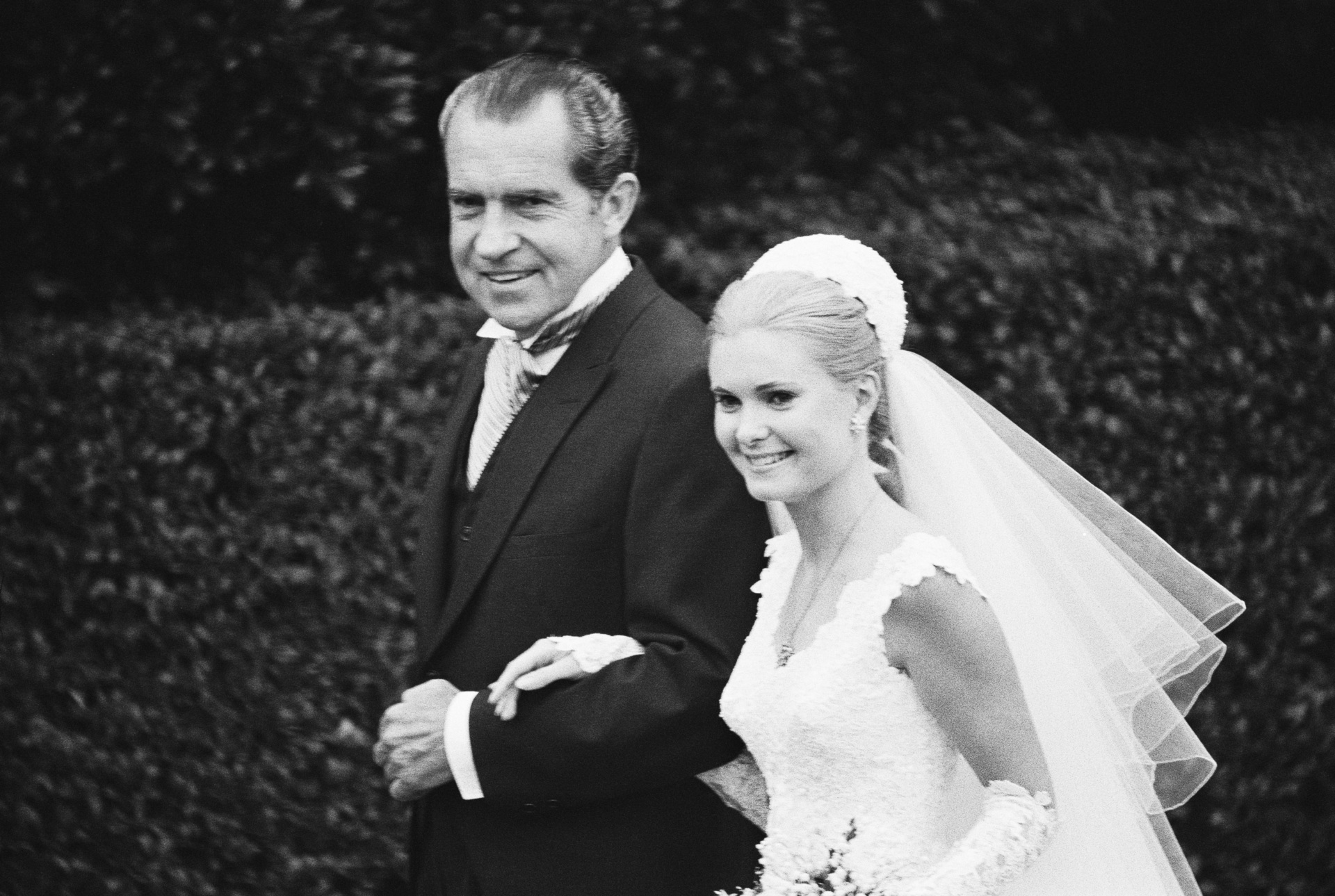 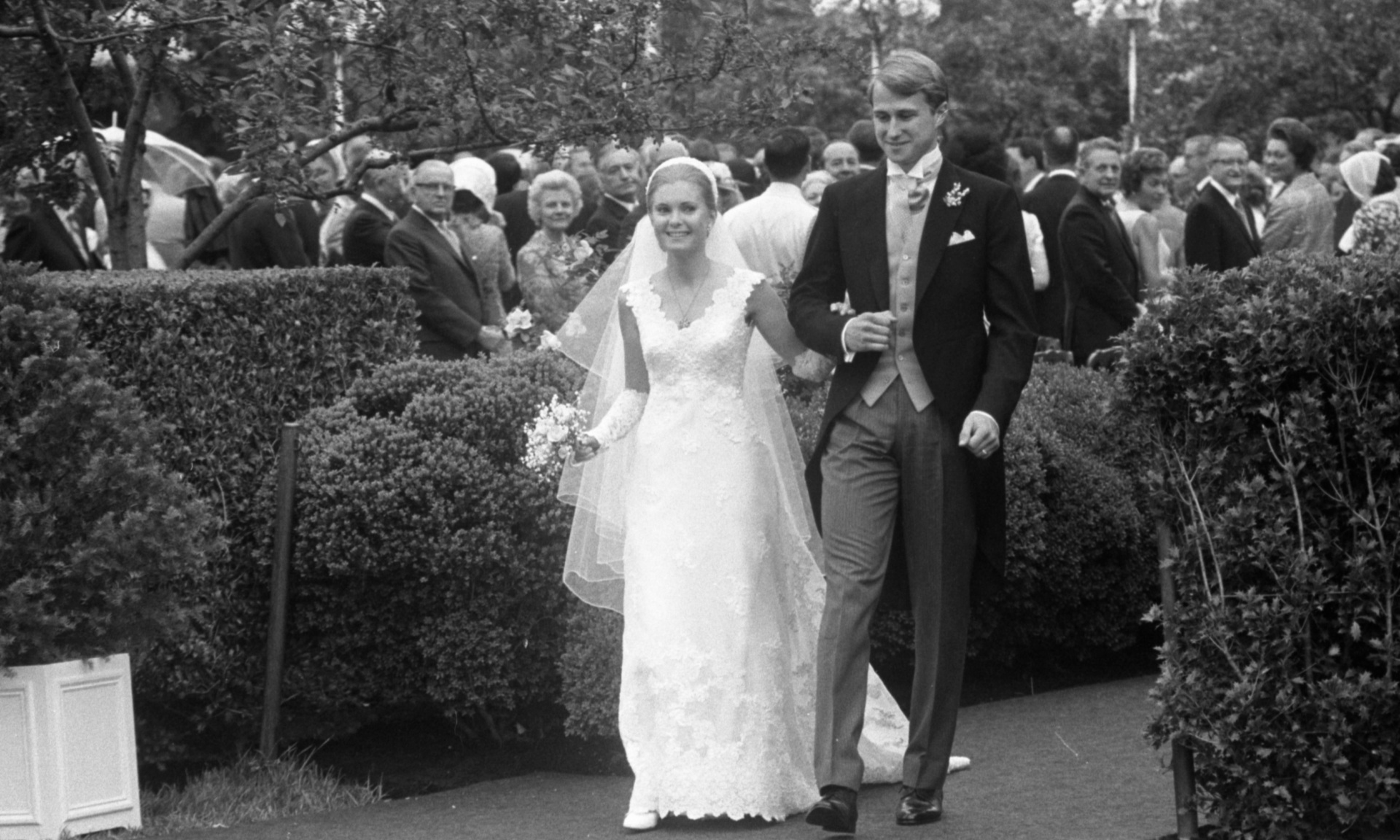 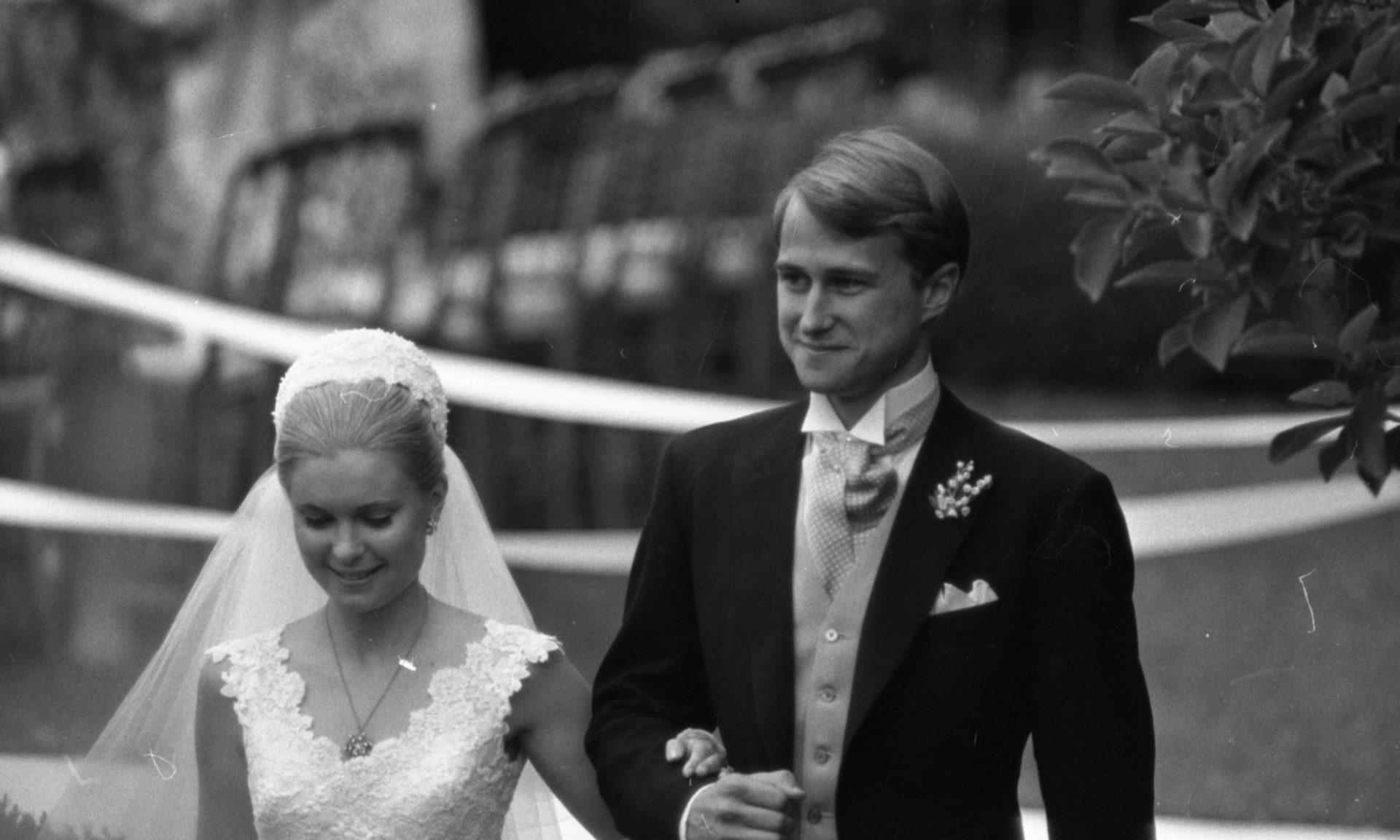 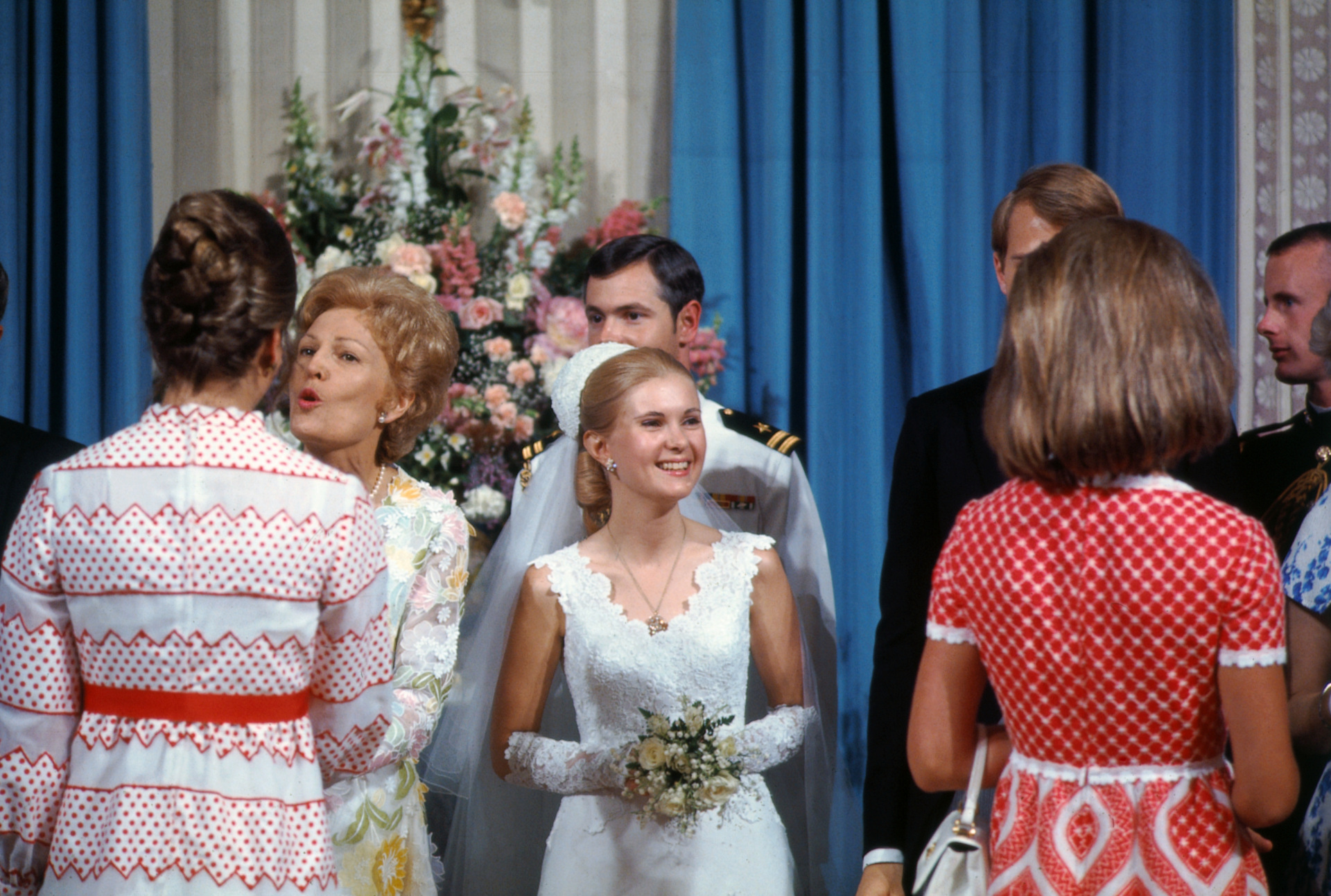 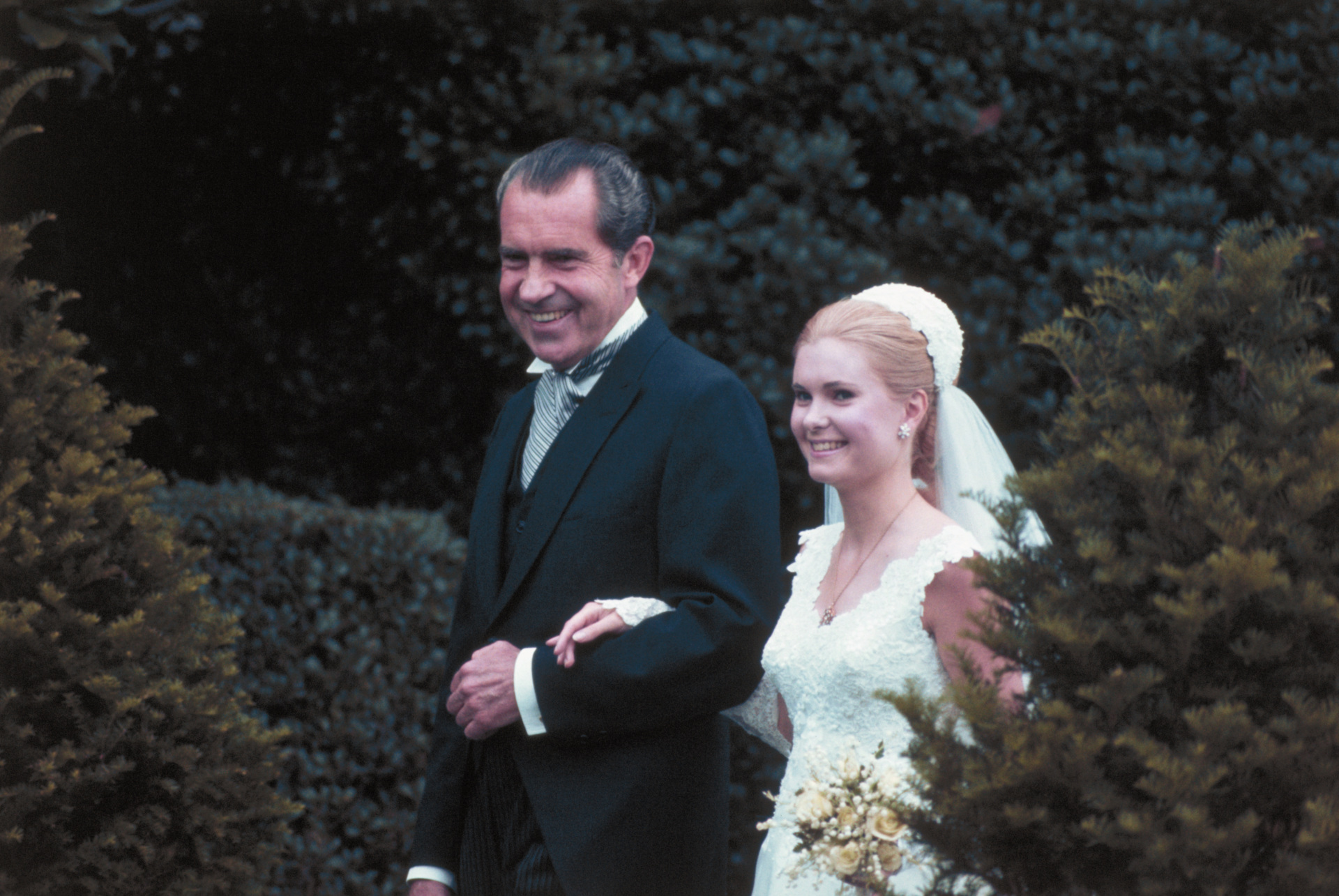 Washington, DC. : President Richard M. Nixon escorts his daughter Tricia from the White House to the Rose Garden for her wedding to Edward Finch Cox, June 12. 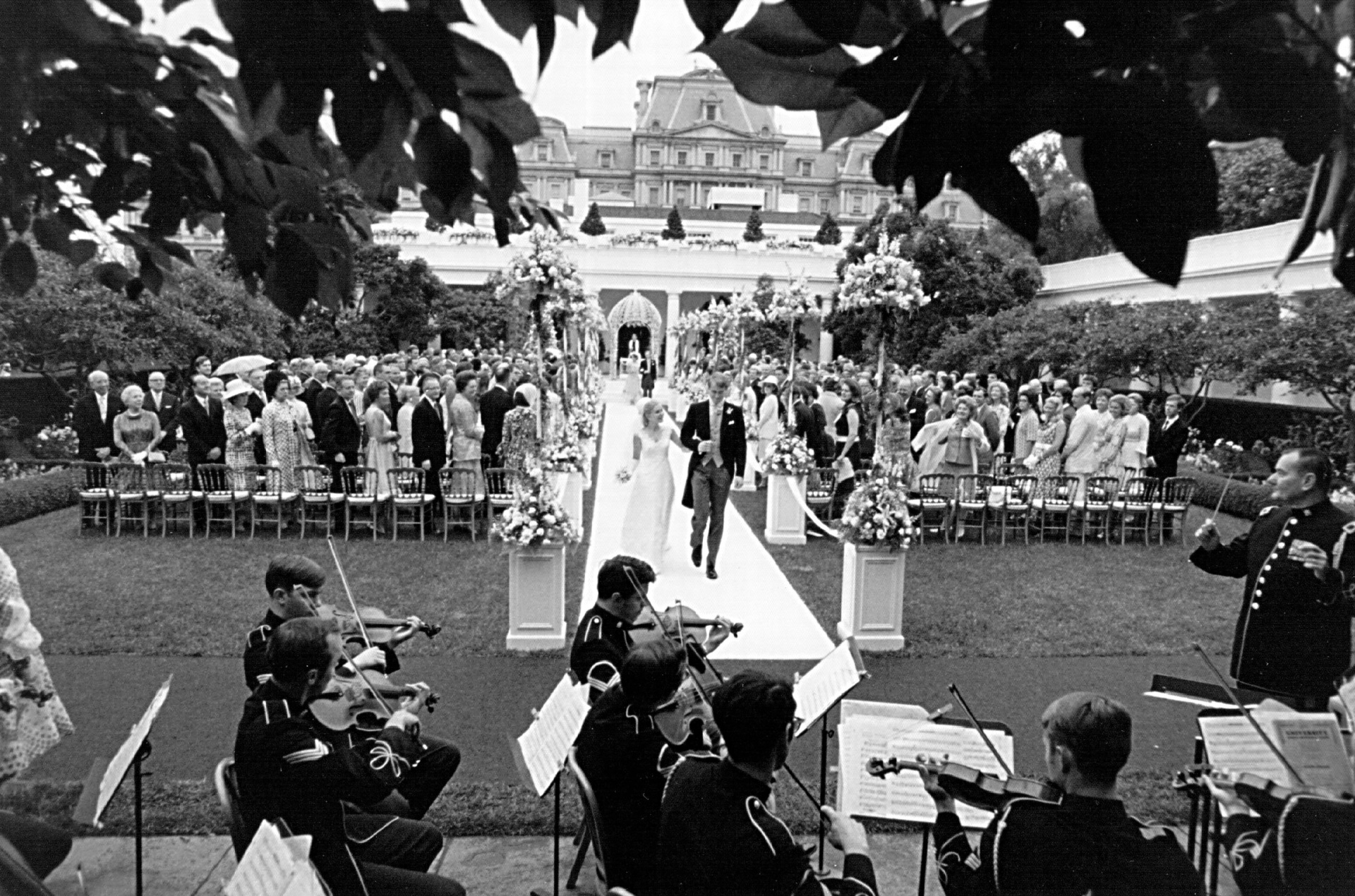 The wedding ceremony of Tricia Nixon and Edward Cox on June 12, 1971 at the White House. (National Archives/Newsmakers) 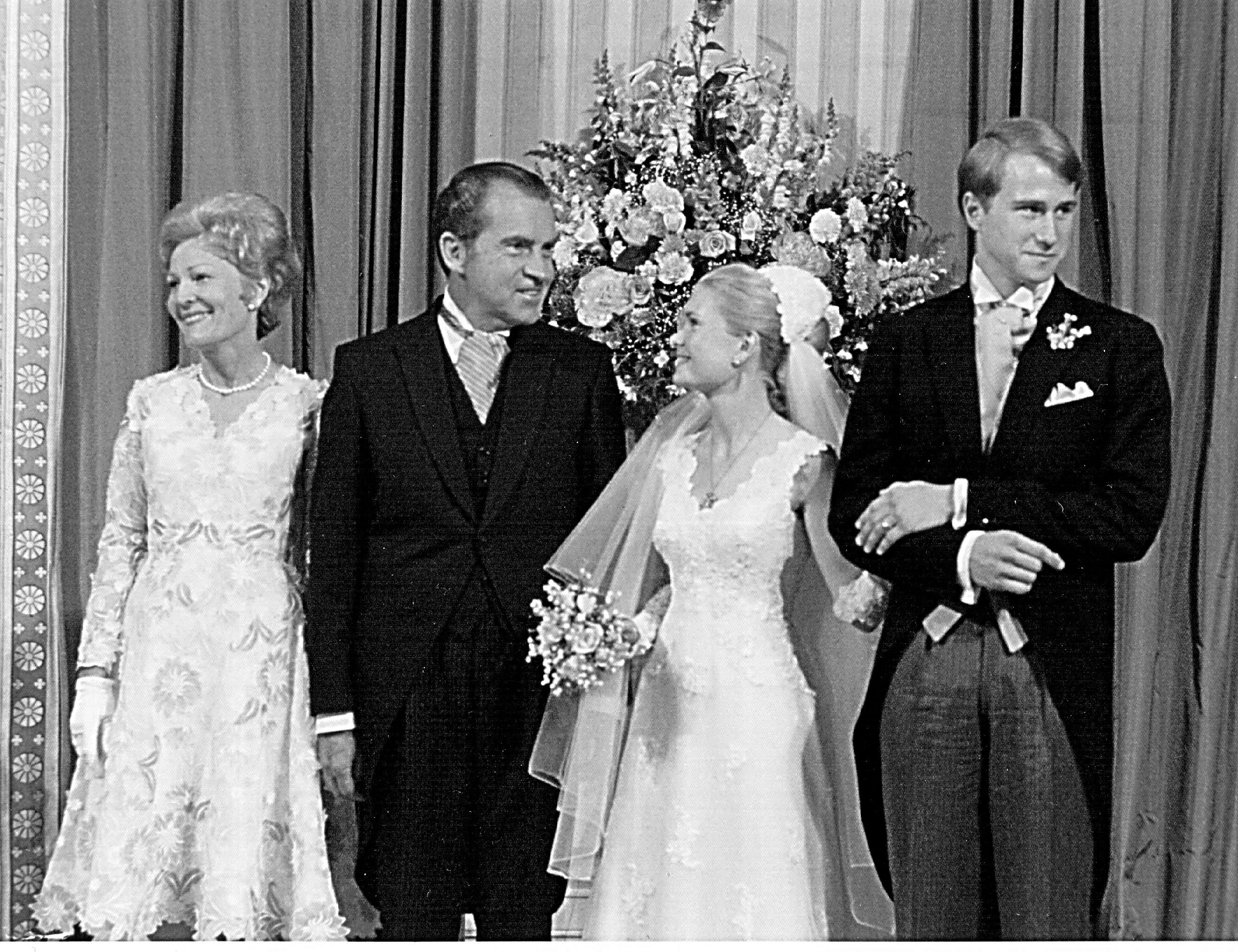 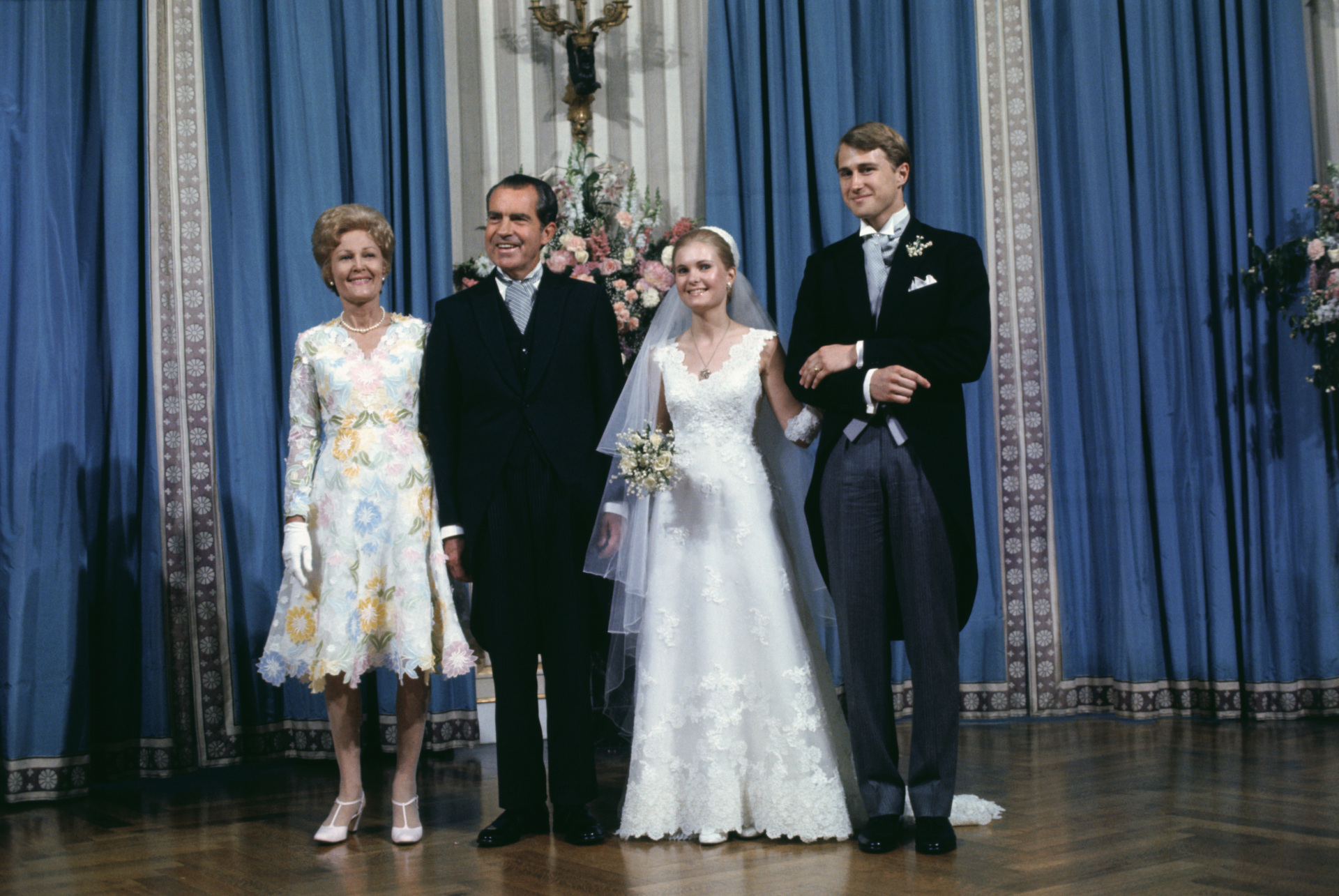 Washington, DC. : President Nixon and Patricia Nixon pose with the newlyweds, their daughter Tricia and Edward Finch Cox, for family portraits at the White House after the Rose Garden wedding. 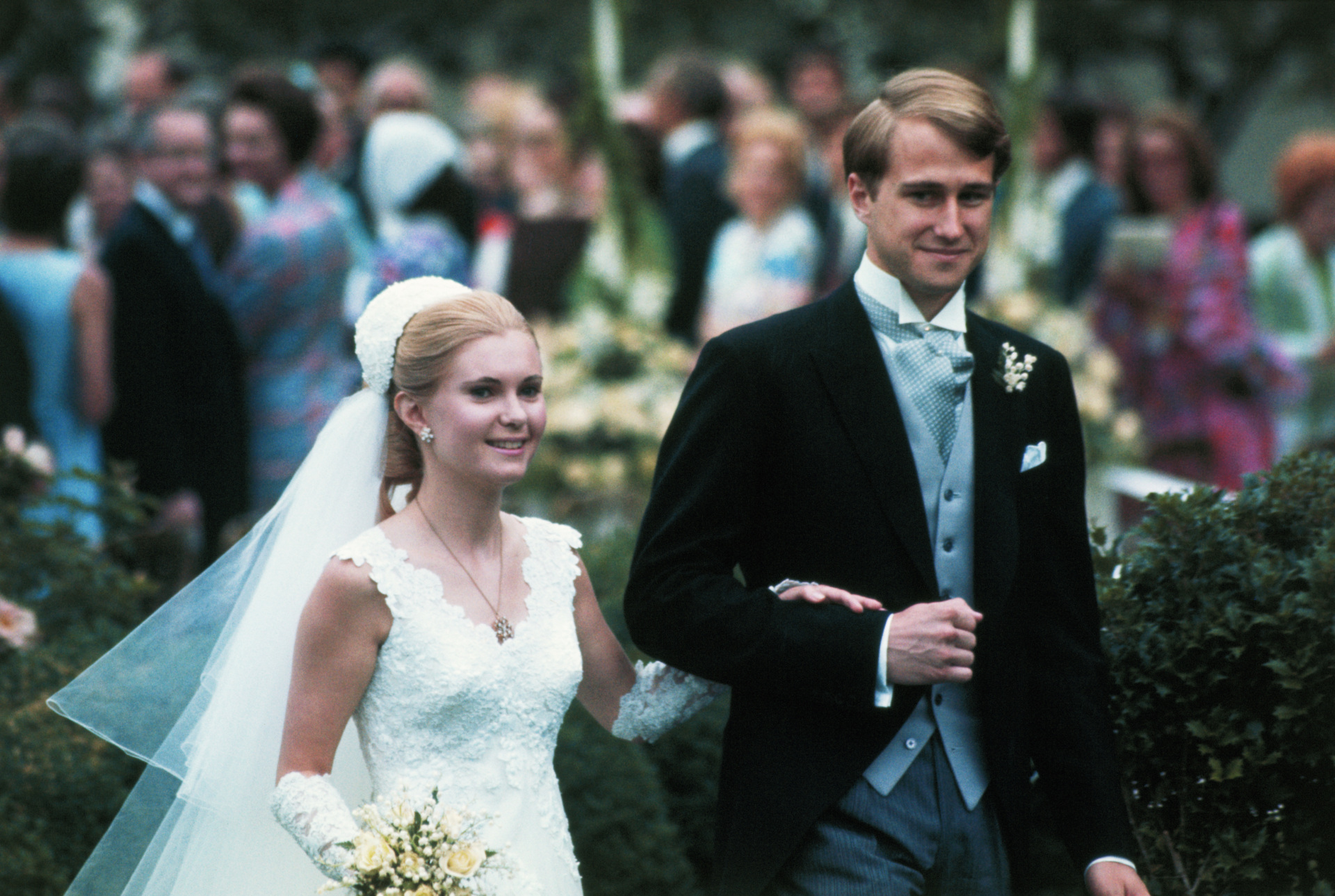 Washington, DC. : Close-up of the bride and groom, Edward Finch Cox and Tricia Nixon, after exchanging their wedding vows during a Rose Garden ceremony at the White House. 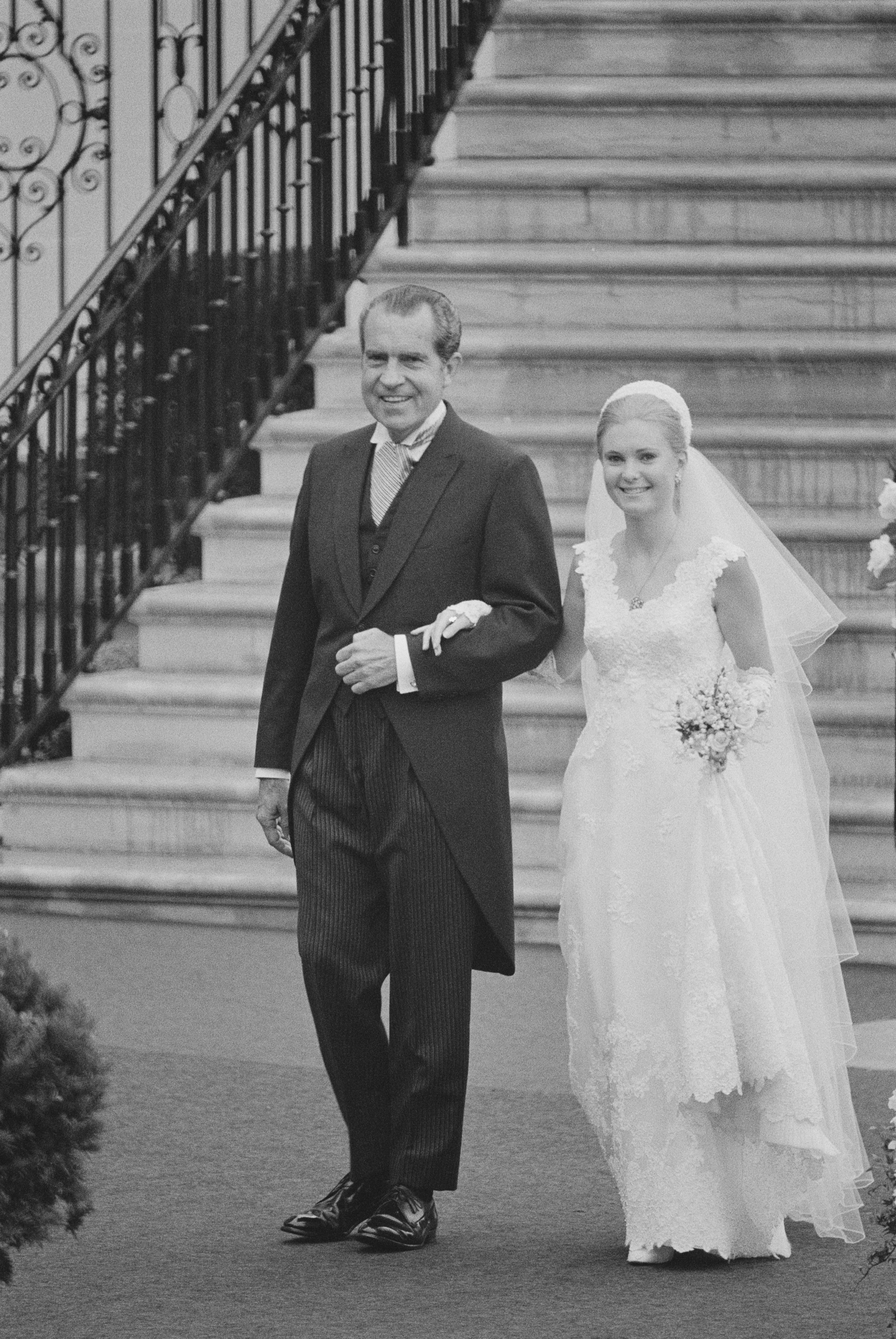 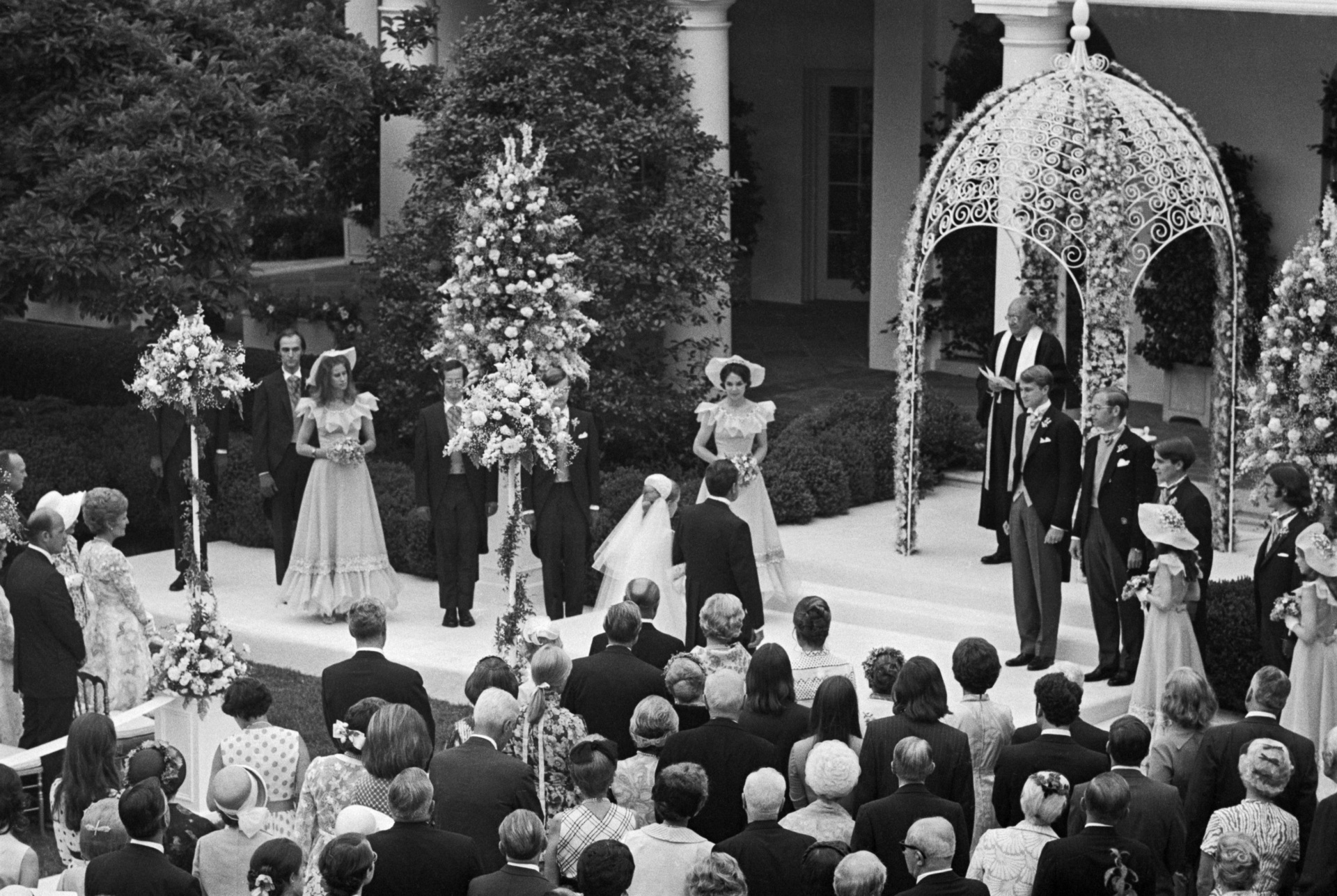 Close. Nixon escorts Tricia to the altar set up in the Rose Garden 6/12. At the top of the steps to the left is Julie Nixon Eisenhower, matron of honor. 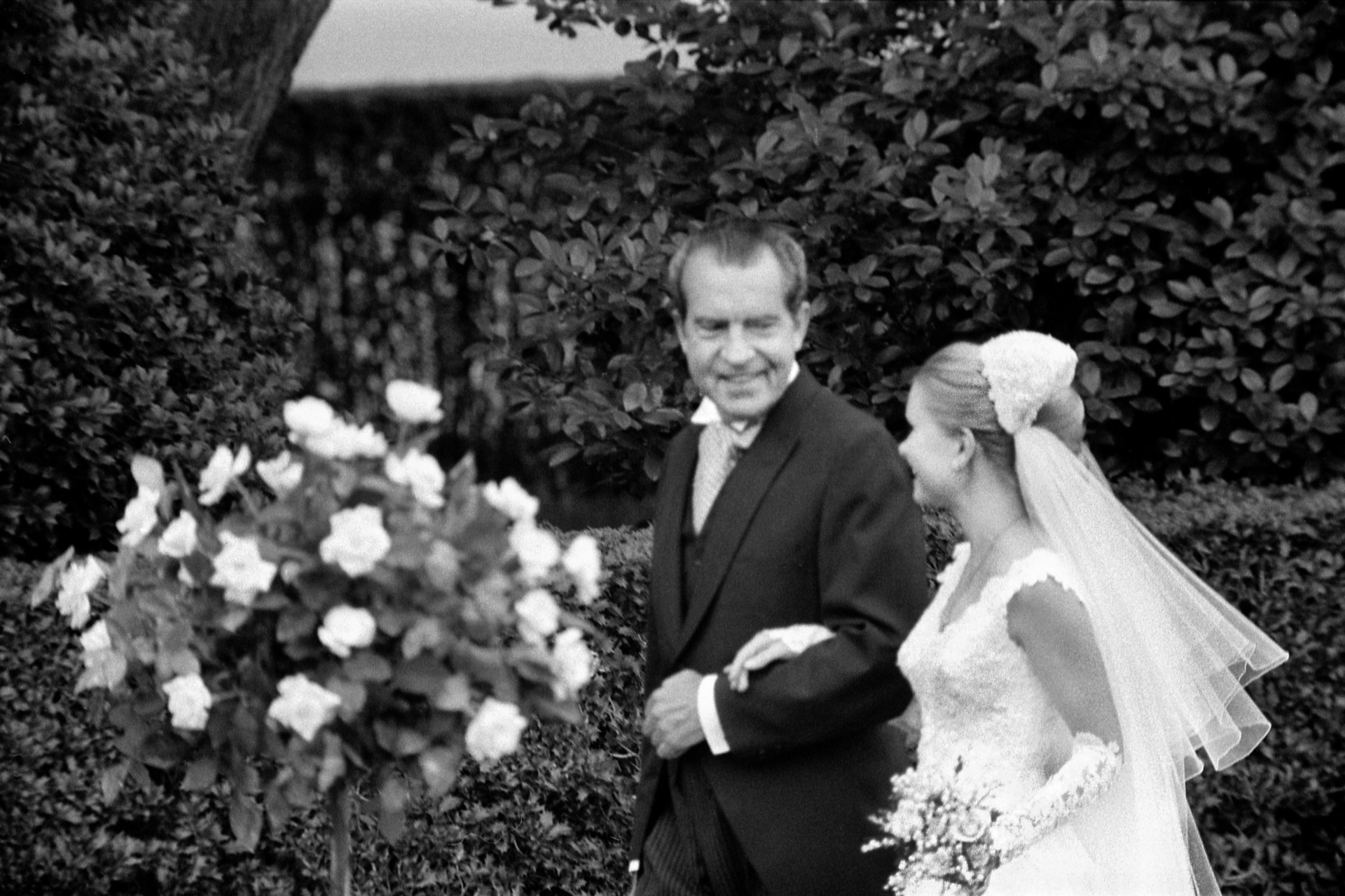 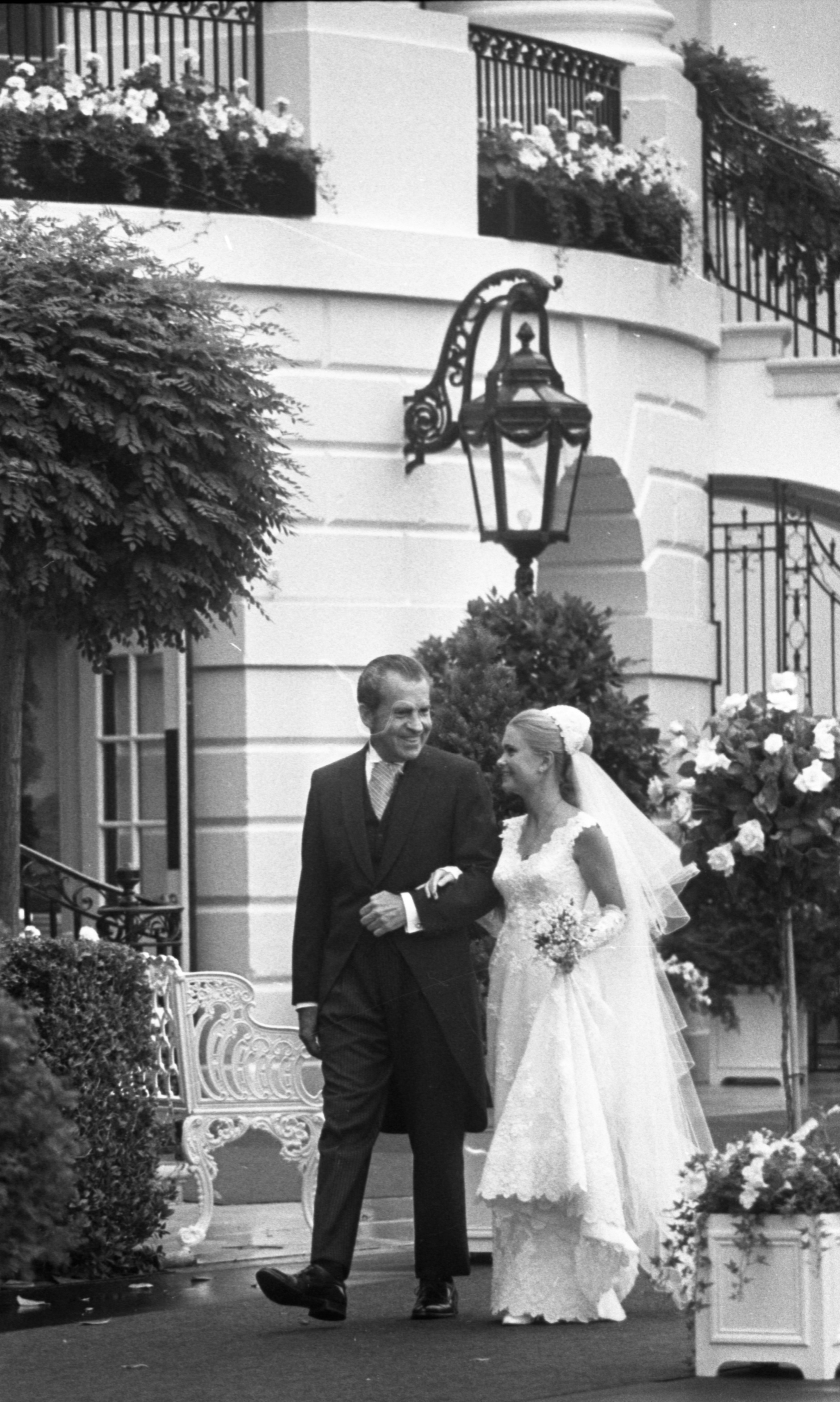 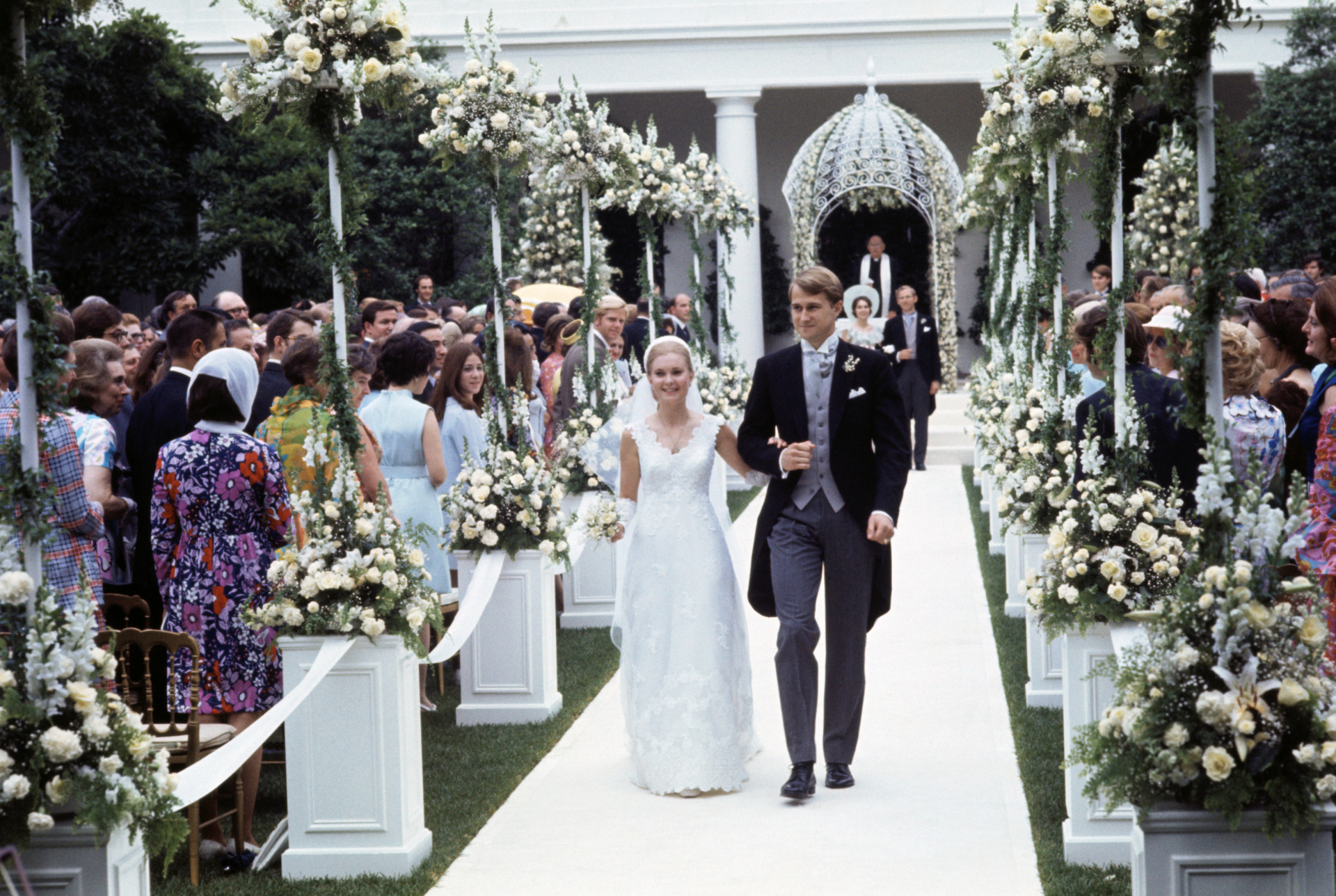 Washington: Edward Finch Cox escorts his fiancee, former Tricia Nixon, down the aisle after their wedding at the White House Rose Garden 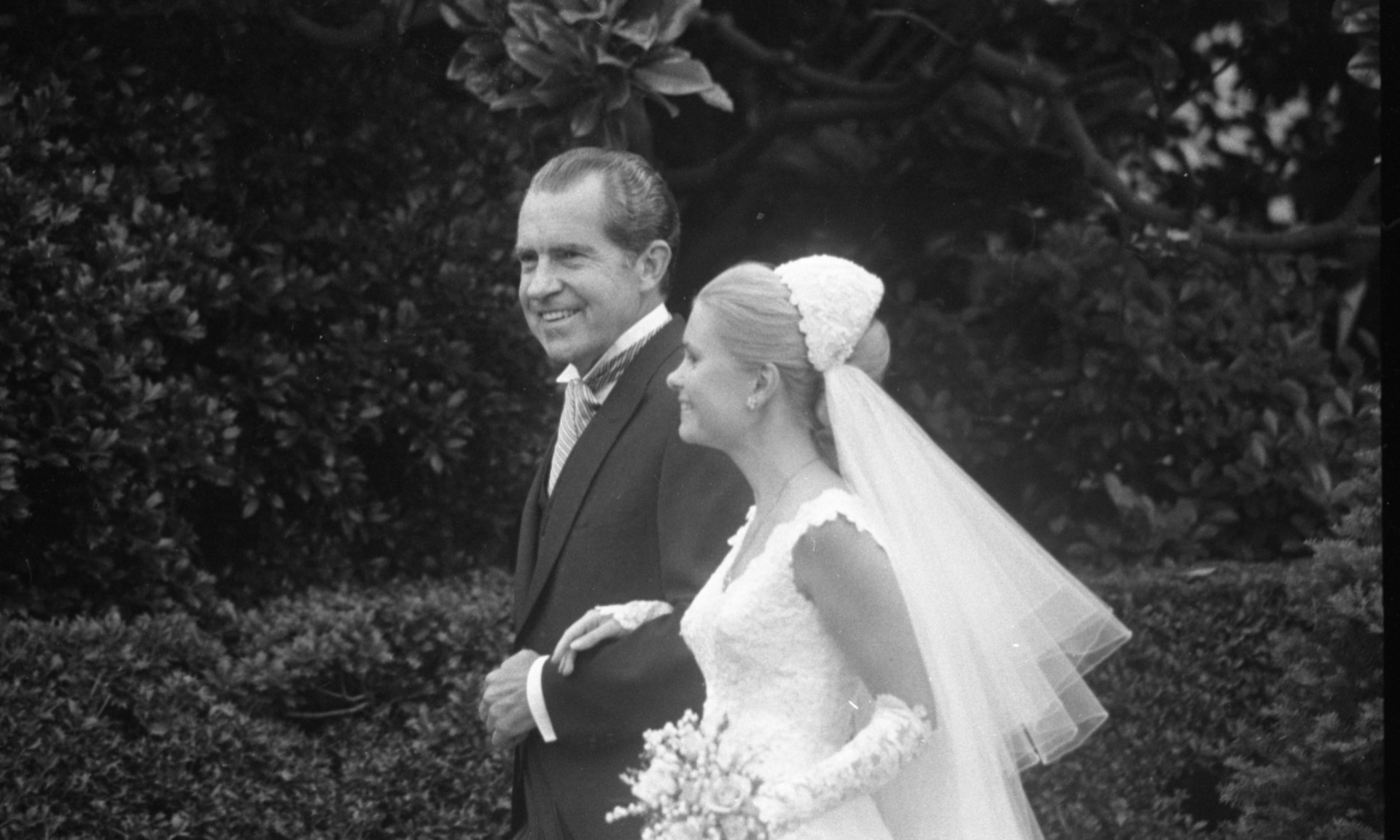 Tricia Nixon on her way to the Rose Garden with her father, President Richard Nixon, during her White House wedding. (Paul Demaria/News Daily News Archive via Getty Images) 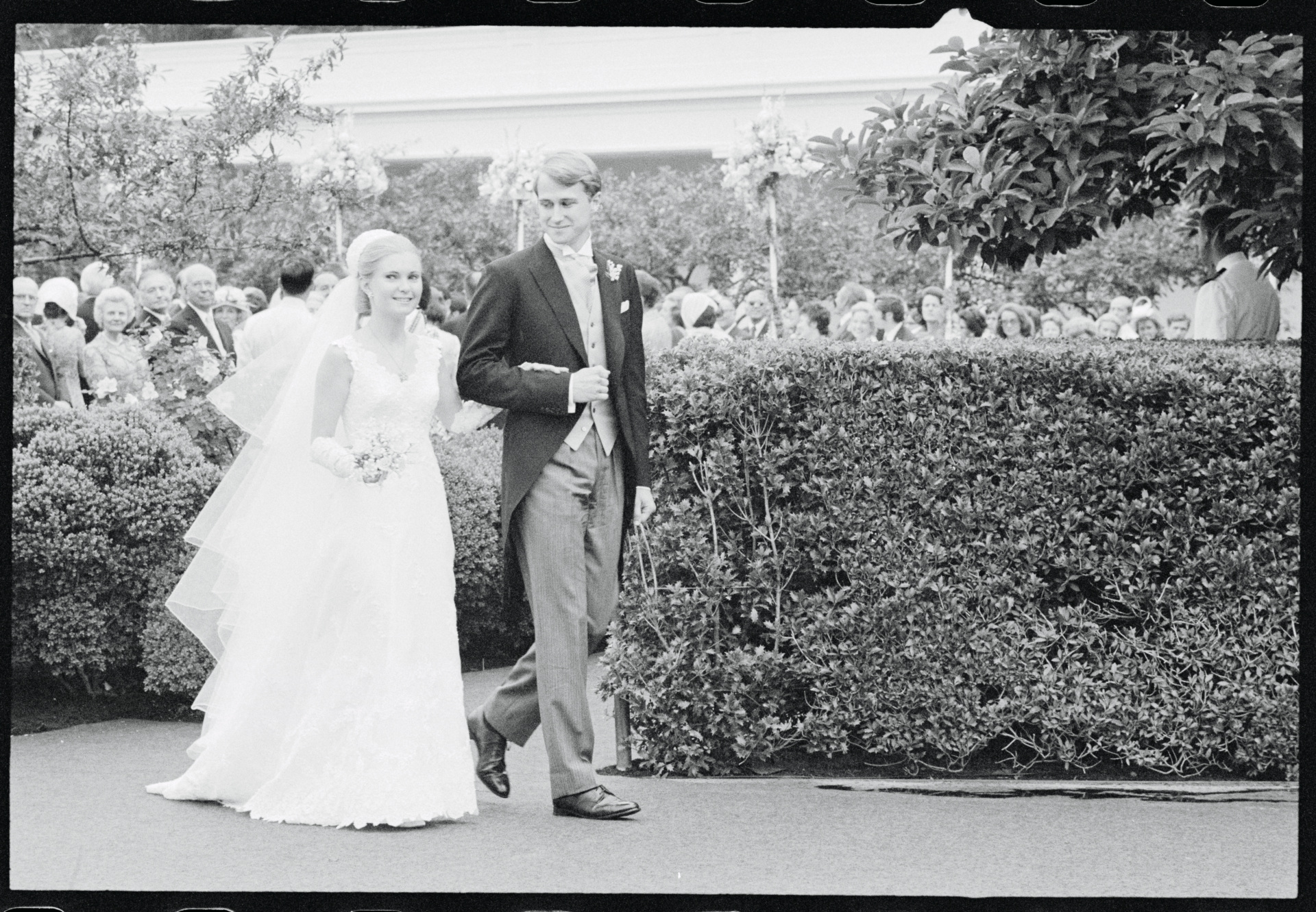 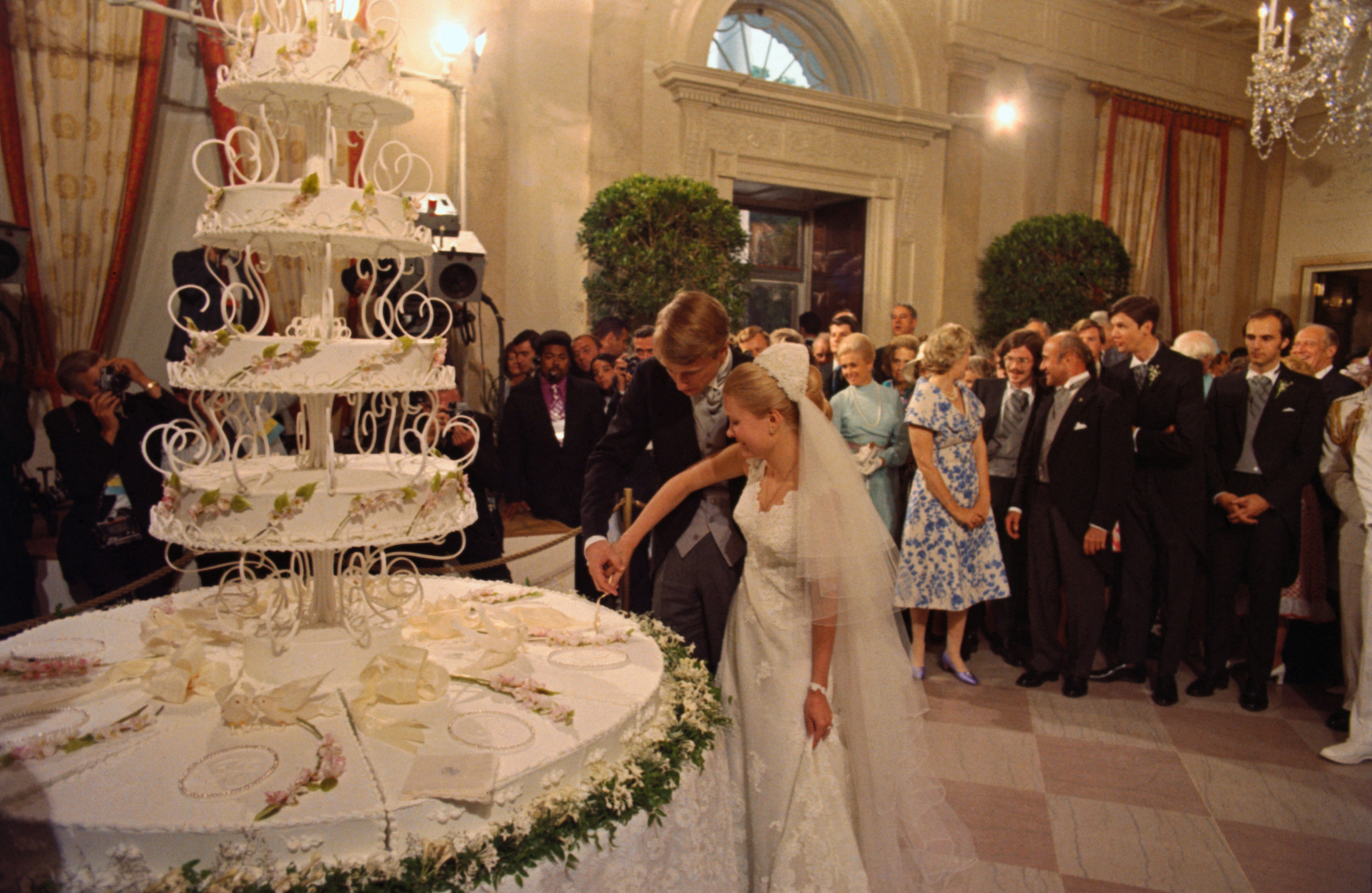 Washington, DC. : At the wedding of Edward Finch Cox and Tricia Nixon, the bride and groom cut the wedding cake in front of the guests. 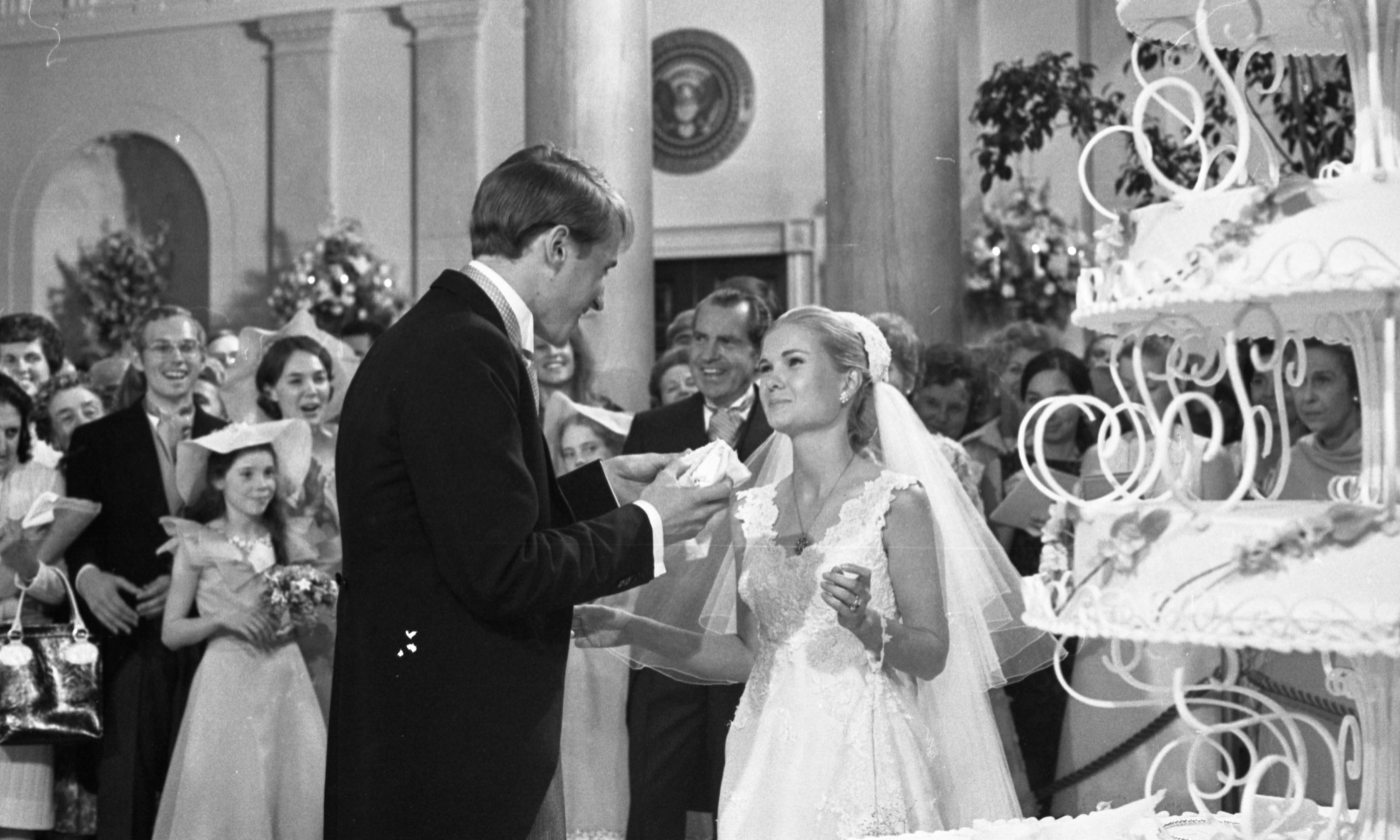 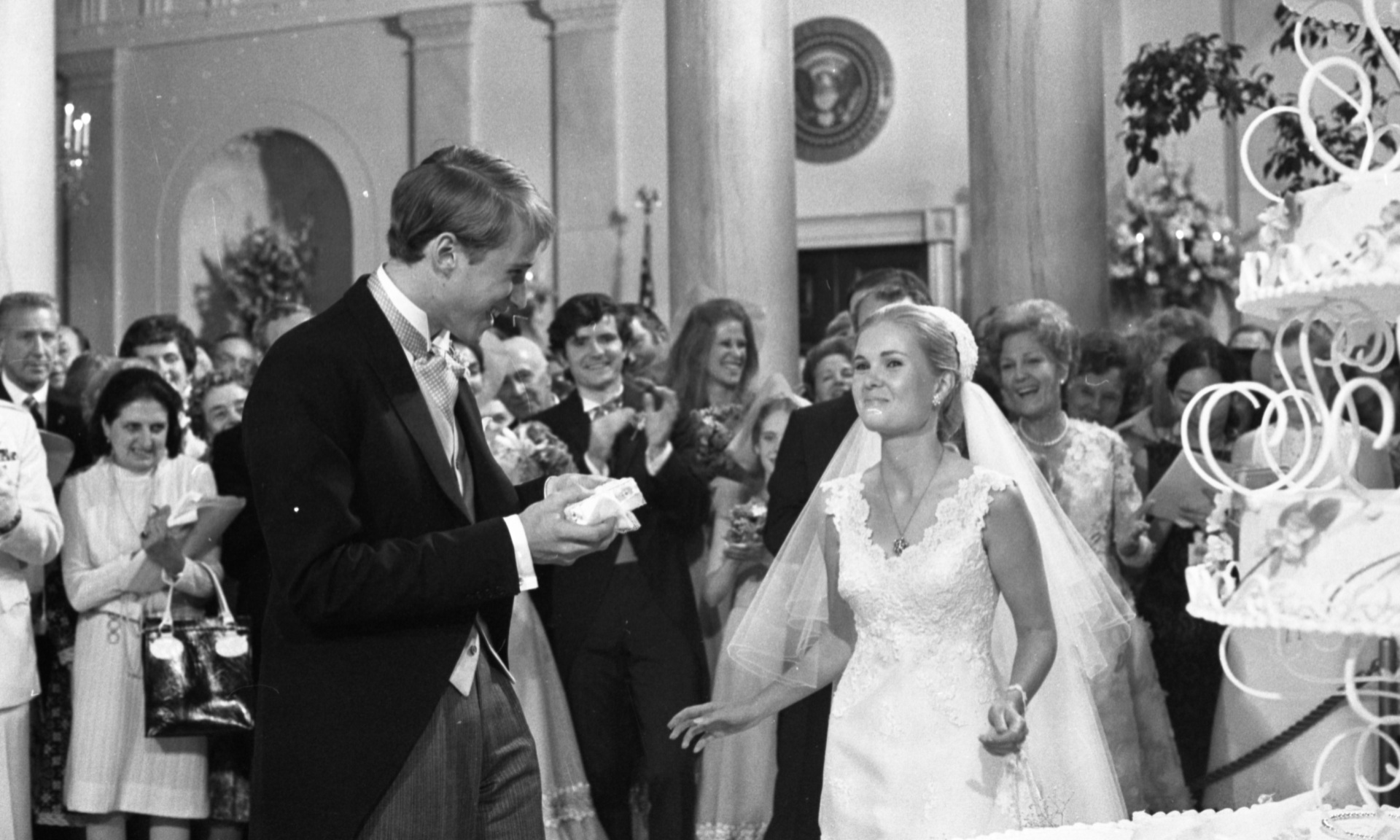 Tricia laughs as Ed teases her with a piece of wedding cake. (Frank Hurley/News Daily News Archive via Getty Images) 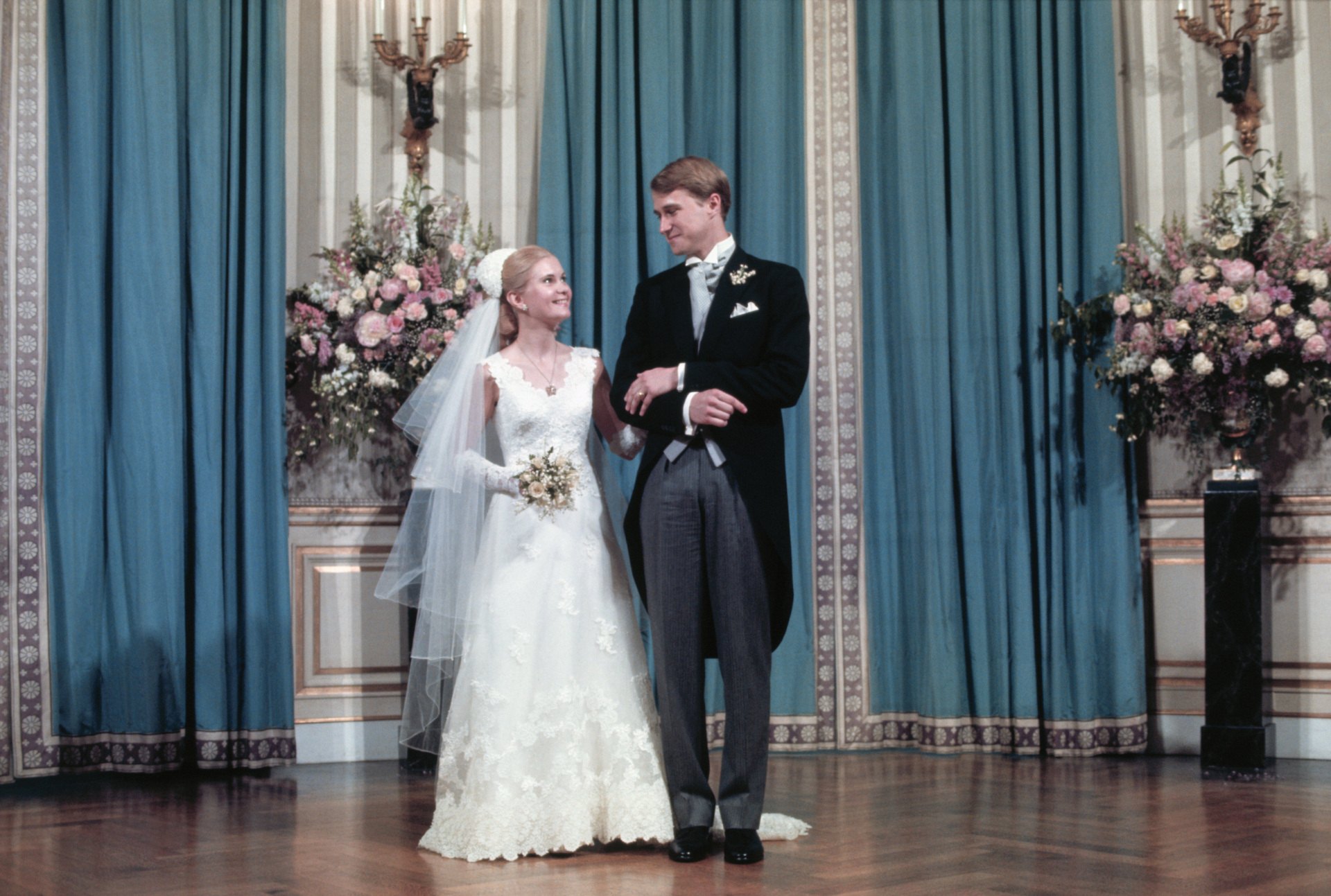 John Binder is a reporter for Breitbart News. Email him at jbinder@breitbart.com. Follow him on Twitter here.

Not all news on the site expresses the point of view of the site, but we transmit this news automatically and translate it through programmatic technology on the site and not from a human editor.
Facebook
Messenger
WhatsApp
Twitter
Google+
Posted by Jeoffro René In USA news - World Last Modified 2 weeks ago 2 weeks ago