Rep. Markwayne Mullin (R-OK), the Republican nominee to represent Oklahoma in the U.S. Senate, said Wednesday in the SiriusXM edition Breitbart Daily News that House Minority Leader Kevin McCarthy (R-CA) has promised him a congressional investigation into the Biden administration’s self-proclaimed “withdrawal” of US military and other personnel from Afghanistan.

He remarked: “If there’s anything the president has done, in my opinion, it may be inscrutable… I think Afghanistan is a huge weak spot for him because he lied to the American people.

From left, Secretary of State Antony Blinken, President Biden, Under Secretary of Defense Kathleen Hicks, and Chairman of the Joint Chiefs of Staff Gen. Mark Milley in Washington on March 16, 2022. (Patrick Semansky/AP)

Mullin traveled to Afghanistan after organizing a rescue operation for Americans left behind by the Biden administration, the New York Post reported in September 2021.

Mullin said the Biden administration is aware of the American lives lost in Afghanistan as a result of its decision making.

“They know the people we’ve lost to failure,” he said. “I lost a three-year-old girl – who died of an infection, a leg infection – that we had in our possession for eight days, and we couldn’t get her through [Hamid Karzai International Airport] because they wouldn’t open a report. We tried to get her through Tajikistan, and the ambassador to Tajikistan told us that he had been informed not to help me in any way. We got her at the border, [and] a young girl ended up dying of a leg infection.

The Biden administration was “leaving behind hundreds of Americans” while presenting a narrative “that the war in Afghanistan was over,” Mullin claimed. 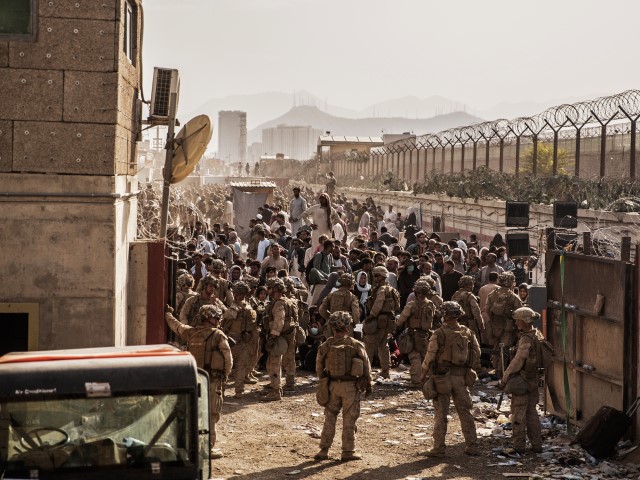 In this Aug. 21, 2021, file photo, U.S. Marines with Special Purpose Marine Air-Ground Task Force – Crisis Response – Central Command provide assistance during an evacuation at Hamid Karzai International Airport in Kabul, Afghanistan. Many US citizens and green card holders are still in the Afghan capital despite official promises that any American wishing to leave Afghanistan would be deported. (Staff Sergeant Victor Mancilla/US Marine Corps via AP, File)

He said the White House lied about removing all Americans who wanted to leave Afghanistan.

Mullin said: “After they left, our team got another 300 Americans out – not refugees, not SIVs, Americans – after they left, aAnd they said that every American who wanted to go out could have gone out, and that’s absolutely a barefaced lie.

“They lied and lied constantly to the American people and they know it, and and that is something we need to pursue,” he added.

Mullin shared that McCarthy had personally promised an investigation into the self-proclaimed “withdrawal” of the US presence from Afghanistan by the White House.

“Kevin McCarthy, who will be our next Speaker of the House, has promised me that it will be one of his priorities that he will pursue and investigate this matter,” he said. “I haven’t spoken to our Senate leaders, but I can tell you what’s going to happen in the House.”

He concluded: “Chief McCarthy told me he was going to go after this. He promised me, because you have to get to the bottom of things. There were a lot of lives that were lost because of their political ambitions of trying to show they did something and then they tried to absolutely cover it up, and that makes me sick.