The center is led by Tom Lopach, president and CEO of the Voter Participation Center and the Center for Voter Information. Lopach’s professional background includes serving as former chief of staff to former Montana Gov. Steve Bullock and Sen. Jon Tester (D-MT). From 2007 to 2008, he also served as National Finance Director for the Democratic Senatorial Campaign Committee, responsible for raising funds to defeat Senate Republicans.

Above Lopach’s signature, a disclaimer admits that Bolduc’s political positions have been misinterpreted by noting that “a candidate’s position is sometimes more complicated than a ‘yes’ or ‘no’ answer. “…If you want additional, detailed information on these matters,” the flyer says, “you can visit the candidates’ websites.” » 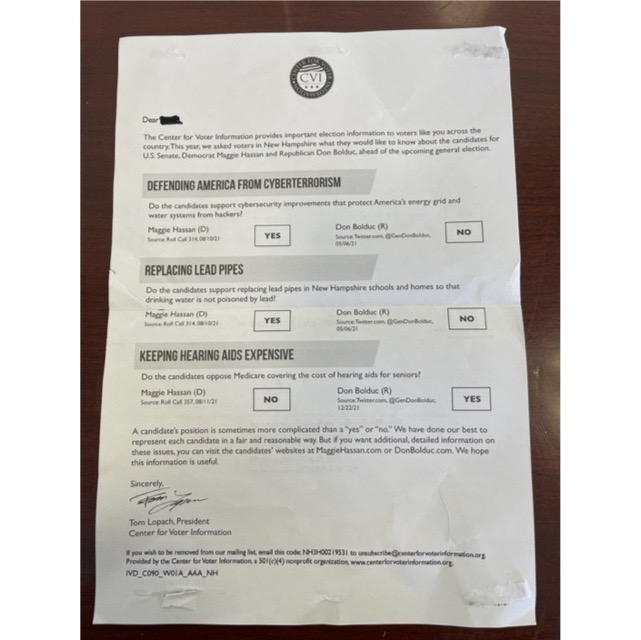 Doug Sears, a former US diplomat, superintendent of an urban school and current resident of Winchester, received the direct mail from Lopach. Sears told Breitbart News that the flyer was attempted to appear non-partisan, but ended up being a “false flag operation run by a longtime Democratic operative.”

“The leaflet we received from the inoffensively named ‘Voter Information Centre’ claims to provide important information to voters and includes the statement ‘we have done our best to represent each candidate fairly and reasonably’ “, Sears said in a statement. written statement. “But this is a false flag operation run by a longtime Democratic operative. And deliberately misinforms.

“General Bolduc is depicted, for example, as not support cybersecurity improvements that would protect the energy grid and water supply systems. Even on the face of it, that’s not a plausible argument,” Sears explained. “The guy has five bronze stars for bravery.”

“Someone is spending big to misinform. We often hear aboutour democracy’ of cultural elites,” Sears added. “Stuff like this tears at the fabric of our constitutional republic.”

The false election information comes as General Bolduc increased his lead over Hassan by nearly two points on Thursday despite going over $9 million, according to the third-quarter fundraising total. General Bolduc fought his way up from 11 points and now leads by two, a 13-point swing in six weeks.

The Granite State Senate race is one of seven battleground states that will determine which party controls the Senate. To retake the upper house, Republicans must hold Wisconsin and Pennsylvania and retake either Arizona, Nevada, Washington State, New Hampshire or Georgia to have a one-seat majority in the Senate.