Adam Devine does not want to be confused with Adam Levine.

The ‘Pitch Perfect’ star took to social media on Friday to set the record straight after people mistook him for the Maroon 5 frontman amid his infidelity scandal.

“Just want to post this and say my wife @chloebridges and I are doing great and going strong,” Devine, 38, captioned an Instagram photo of him and Chloe Bridges, whom he married in October 2021.

“I’m not Adam Levine. He’s a different guy and a worse singer,” he joked. “We’re naming our future baby Sumner though.”

Devine – along with many other social media users – has been researching Levine, 43, since he was accused of cheating on his wife, Behati Prinsloo, with Instagram model Sumner Stroh.

The 23-year-old model went viral on TikTok earlier this week after revealing she had an affair with a “man married to a Victoria’s Secret model”. 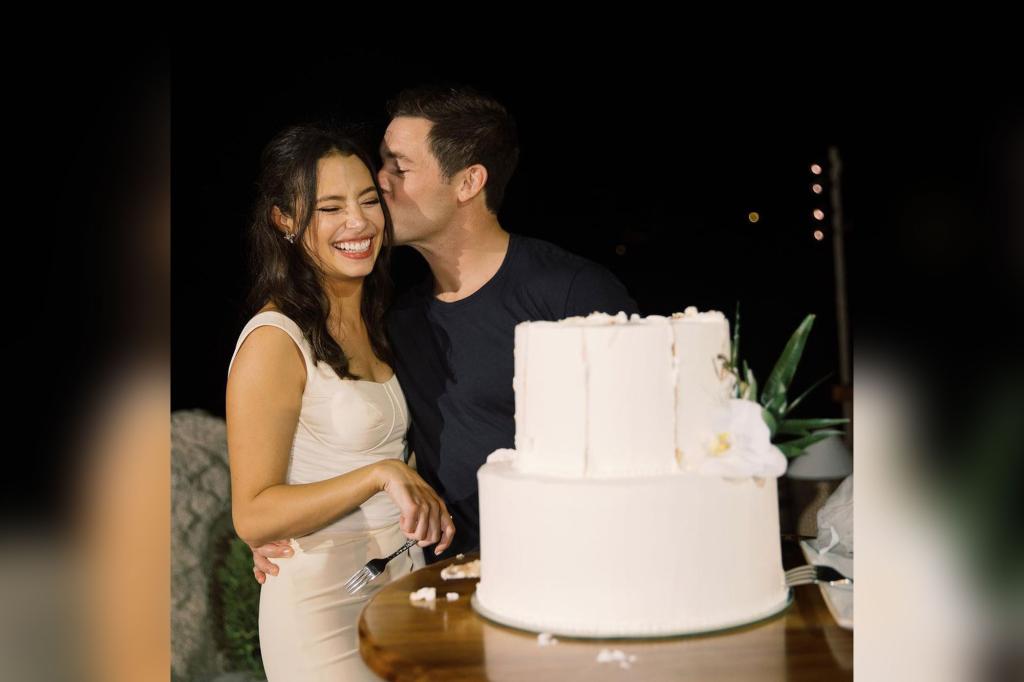 Adam Devine and Chloe Bridges at their wedding.

In the video, Stroh alleged that the “Memories” crooner reached out to her in June and asked if she was comfortable with him naming her future child after her.

However, Levine immediately denied the allegations, saying that while he had “crossed a line” by sending flirty messages to Stroh, it never went beyond that.

“I showed poor judgment by speaking with anyone other than my wife in ANY flirtatious way,” the “Payphone” singer said in a statement.

“I did not have an affair, nevertheless, I crossed the line during an unfortunate period of my life,” he wrote, adding that his family is the only thing he cares about.

The couple – who married in 2014 – share daughter Dusty Rose, 5, and Gio Grace, 4, and are expecting their third child.

Since Stroh’s first allegations on Monday, four other women have claimed the “Moves Like Jagger” singer sent them inappropriate messages while in a relationship.

In a since-deleted TikTok, Alyson Rose shared flirtatious messages she received from the singer, who even admitted he “shouldn’t talk” to the model.

Another woman, fitness model Ashley Russell, shared a similar experience when the father-of-two complimented her physique.

“He would mainly love the booty stories and would always respond with something to do with the leg or the booty day at the gym,” Russell, 21, told the DailyMail.

“When I told him he was going to get caught hitting on girls like me, he stopped texting me,” she said.

While Prinsloo is said to be “very upset” by the recent allegations, the couple appear to be united as they were seen in Los Angeles.

Although the couple appeared to be all smiles as they stepped out, some fans believe Prinsloo was sending a message through her clothes.

The model was spotted in a pink tank top printed with the word ‘Love’ next to a coiled snake – a potential clue to her husband’s snakelike behavior.

Not all news on the site expresses the point of view of the site, but we transmit this news automatically and translate it through programmatic technology on the site and not from a human editor.
Eleon Lass2 weeks ago
Facebook Twitter Tumblr Pinterest Reddit

Covid home rapid tests: how accurate are they and answers to other questions

Can you tell me what would happen if the FBI investigated a Democrat?

‘It was like wringing out a dry sponge’: Indian dairy farmers face scorching heat | Environment